Multiplayer Dungeon: 2-4 players can team up to challenge the Multiplayer Dungeon. Teaming up with in-game friends will give players an extra bonus. Players can have teammates from different servers. Dungeons will open gradually according to the player’s level. One dungeon has three different difficulties. The harder the dungeon, the better the rewards. Before the battle, teammates gather in the waiting room to prepare for it, and the team leader (the one that creates the team) can arrange everyone’s positions.

Trial Dungeon: Trial Dungeon is where players get the enhancement materials for wings. Players have one chance to challenge the Wings Trial every day. When the trial battles begin, enemies will appear round by round. When all enemies are defeated or the player’s team fails, the trial ends. If players can kill all enemies in that round within one round, they can skip three whole rounds and continue to the next one. Every 5 rounds, players can get an extra chest filled better rewards (this part is the same as those in Wings System part).

Hero Dungeon: There are 20 hero dungeons, and each one is guarded by a hero. Players can get lots of rewards by defeating these heroes every day and can unlock certain heroes in the Tavern. Players can use the One-click Blitz function to skip the dungeon battles that they have already finished and get the rewards immediately.

Arena: Arena is one of the main PVP features in Dragon Awaken. Players can participate in 1vs1 battles to reach the top of the rankings. They will also receive points and other rewards to help them to become stronger. 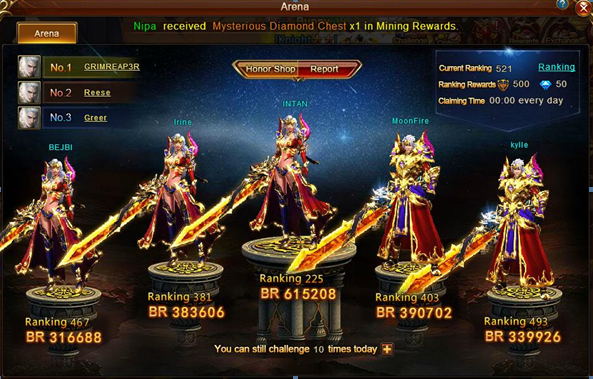